On Saturday afternoon my daughter and I traveled to Brisbane to see Riverfire – the major concluding event of the city’s annual festival. On the way to an early evening fireworks display I reflected on how the WWI Centenary celebrations have flavoured many public events this year.  For example, just two weeks earlier we’d seen am over-sized  khaki-and-slouch-hat decorated koala on Currumbin Beach as part of the SWELL Sculpture Festival.

On the way to secure a riverfront position, we passed a display of modern tanks and armoured personnel carriers in the piazza, then a recreated World War I encampment complete with a command post tent and live nurses with their red woollen capes and impossibly white hats and aprons  (we’ve been watching the recently aired miniseries Anzac Girls on ABC1 and I suspect the mud of the Western Front was not so good for the laundry).  Nearby I lost my daughter to a close examination of how tight the girth-strap was on a fully kitted-up (static) Lighthorse standing patiently beneath a knotted cord fly veil, listening to his handler under the hat with the emu feather plumage.

There were also museum displays of artifacts, ration books and other memorabilia. The label on the 9-foot long Vickers Machine Gun ammunition belt explained the term: “to give them the whole 9 yards”. Ahh!
The evening drawcard was a half-hour long fireworks display from a number of barges set along the river between bridges that span the reaches of a mangrove-lined estuary. 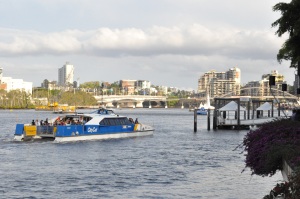 As ever, the Brisbane River was brown under uncertain skies. We used to joke that the river traveled upside down. The grounds of arable soil from the salad bowl of the Lockyer Valley caffeinate the lethargic beast. Low pressure weather systems saturate the watershed and rouse the beast from the lazily curving course to the sea. I also suspect that the alluvial load that feeds the ecosystem of Moreton Bay makes the local mud crabs that much tastier.

There is a certain humidity that is the Spring evening’s foretaste of subtropical summer nights just around the corner.  I licked my lips and remembered the saltiness that came from the exertions of early mornings and late afternoons training with four other university students for the inter-college rowing. Starting in a wide-bodied ‘tub’ we were more than a little worried when we converted to the streamlined and egg-shell thin racing hull. We were blessed with an enthusiastic cox (now a senior environmental planning lawyer) who memorably encouraged us with the following:
“Girls, when the boat is perfectly set up and you are all rowing in time, it will be better than sex!
To which we responded: “Ian! What would you know about sex?!”
From the position of stroke I recalled the non-enviable achievement of ‘catching a crab’ when my oar became stuck below the surface of the water during one of our inter-college races. Rowing also developed hardened callouses on one’s hands, so it became memorable for all the wrong reasons!

My mind came back to the present scene – a vantage point along the river bank opposite the city centre towers and the intertwining liana vines of the riverside expressway.  Overlooking a sunset against storm clouds threatening from the south, my daughter and I stood amidst strangers who turned out to simply be friends we hadn’t yet met. Over two hours we chatted… A softly-spoken woman with a girl a year older than my own from Jakarta, a relatively new resident to our country. Another mother nursing a grizzling three or four year old blonde-haired girl, for whom the two hour wait until the seven o’clock launch was much too long. A man from Dunedin in the South Island of New Zealand with a massive zoom lens on his camera with whom I swapped places to take a better variety of shots. The aroma of hot popcorn jostling sensory input with the noise of a radio jock compering from somewhere along the riverfront blaring from nearby speakers between the assault of audio commercials. Keeping my security-searched backpack within viewing distance, my daughter walked alone through the crowds to buy an ice cream. I thought back to Expo ’88 when strangers who found themselves in long queues to look inside the various country pavilions got to talking and sharing a little of their own world with other random visitors.

Standing on either side, a community of people is built from sharing a time and space.

Instead of the F1-11 jets of my youth, Super Hornets unzipped the pink-tinged sky before the blast of moving sound swept over us.  Later helicopters buzzed in a choreographed dance above the downdraft whipped water. The Police Pipe Band played on gallantly aboard the grey hulled launch as kilts lifted against the helicopter’s deflected windprint, sporrans (thankfully!) anchoring their modesty.

My child, innocent of war but of an age to be developing a social conscience, clutched my arm and leaned close to tell me something over the soundtrack of modern music. I thought of mother’s in other places for whom the camouflaged bird in the sky is far more sinister than disoriented fruit bats that winged their way in confusion across a wet-bottomed corridor suddenly transformed from benign back street to multi-laned highway.  The flock of white birds seeking a quiet roost for the night were just as disturbed and the candy-lights of police cars on the approaches to the bridge halted traffic ahead of the impending fireworks.

Soon enough there was the sensory assault of unzipped jet engines, pyrotechnics, gunpowder smoke drifting in a thickening cloud and the strains of the perennial synchronized favorites in Queen’s Bohemian Rhapsody,U2 and Pink Floyd. 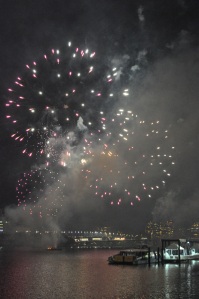 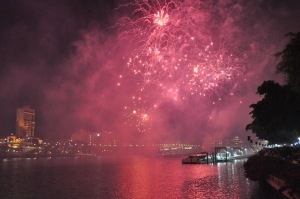 Ahh I am a child of the Brisbane of the 1980s, for I went to boarding school for five years not more than 800 metres as the crow flies from where I stood. Many an evening had been spent looking out the dormitory windows over the lights of a country town that was busy morphing into a metropolitan city with a new suburban skirt of brick and tile emerging between the vernacular high-set timber cottages.  Evenings with my eyes drawn to the spire of ringed lights atop the MLC Building indicating temperature changes now compete with the fuchsia pink up-lights that stain the solid sandstone facade of the Treasury Building that was somehow transformed into a casino along the way.

Brisbane, we have both grown older in the years that I’ve been away. Still I bring my child to wander on your sandstone edged banks. These days there is a large wheel that turns clock-like ticking off the hours, marking the ebb and flow of tides.

Beneath the clearing smoke as the crowd moves off to their night’s roosts to the sounds of The Choirboys’ “Run To Paradise”  http://www.youtube.com/watch?v=zlIXT0yhq5M&index=1&list=RDzlIXT0yhq5M and revel in dreams of a peaceful world reflected in the city lights that still dance on your brown waters.<AJC>

4 thoughts on “River On Fire (Haiku)”